Is Ivermectin treatment for COVID-19? 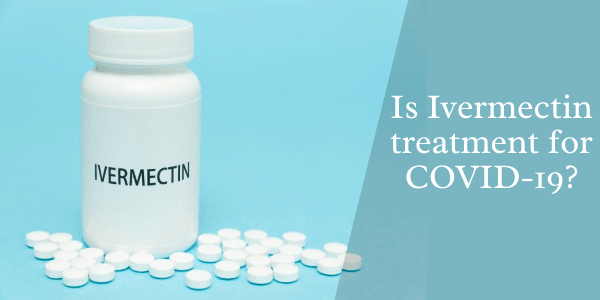 Can Ivermectin be taken to treat COVID-19?

Ivermectin is an antiparasitic medication used to treat parasitic infections caused by worms or mites. But the Food and Drug Administration (FDA) has not approved this medicine to treat COVID-19 in people. Because the evidence supporting the benefits and safety of Ivermectin has not been established.
People should not take Ivermectin for the treatment of COVID-19 without consulting their doctors. Further scientific studies are needed to evaluate the safety of Ivermectin in treating or preventing COVID-19. Until more clear evidence is available, FDA recommends that the medication can only be used in COVID-19 patients in clinical trials.

What are the uses of Ivermectin?

Ivermectin is used to treat the following infections:

2.River blindness (Onchocerciasis) is caused due to the parasitic worm called Onchocerca volvulus. It is characterized by skin rashes, itching, bumps under the skin, eye infections, vision changes, and blindness.

3.Skin mites, also known as scabies, are caused due to parasitic mites called the Sarcoptes scabiei. The infection causes severe itching, blisters, and lumps on the skin.

Ivermectin is prescribed to treat parasitic diseases caused by worms in humans and animals. But Ivermectin preparations meant for animals are different from those available for humans. Taking animal drugs can cause serious side effects in people. Therefore, people should not take Ivermectin intended for animals.

What is the dosage of Ivermectin for humans?

Ivermectin is available as tablets in 3 mg strength. The doctor prescribes the correct dose of Ivermectin based on the age, weight, and medical condition of the patients. The recommended dosage of Ivermectin is 150-200 μg per kg body weight taken as a single dose.
Take the Ivermectin tablet orally with a glass of water on an empty stomach (at least 1 hour before a meal). Always take the tablets at the same time every day for maximum benefits. Contact your doctor immediately or go to your nearest hospital if you have taken too much Stromectol.
Ivermectin is not recommended for use in patients weighing less than 15 kg.

How does Ivermectin work?

Ivermectin belongs to a class of antiparasitic medications called anthelmintics. The medication works by binding to the nerve and muscle cells of parasites such as roundworms and mites. It eventually causes paralysis and the death of parasites. Ivermectin also prevents parasites from making larvae and reduces infection in the body.

What are the side effects of Ivermectin?

Patients taking Ivermectin experience common side effects that may disappear after some time, including:

Ivermectin may cause adverse side effects, including:

Contact your doctor immediately if you notice any side effects of Ivermectin that bother you or do not go away.

Is Ivermectin safe to take for pregnant or breastfeeding women?

What is the brand name for Ivermectin?

Ivermectin is available under the brand name Stromectol.

Which drugs can interact with Ivermectin?

Ivermectin may interact with other medicines when coadministered together. It may change the effectiveness of the drugs and increase the risk of adverse side effects. Before starting Ivermectin, tell your doctor about all the medicines you are taking, especially diethylcarbamazine citrate (DEC), warfarin, barbiturates, benzodiazepines, sodium oxybate, and drugs for epilepsy and bipolar disorder.

Who should not take Ivermectin?

Do not take Ivermectin, if you are allergic to its ingredients and have liver problems and Loiasis (African eye worm).

What should you avoid after taking Ivermectin?